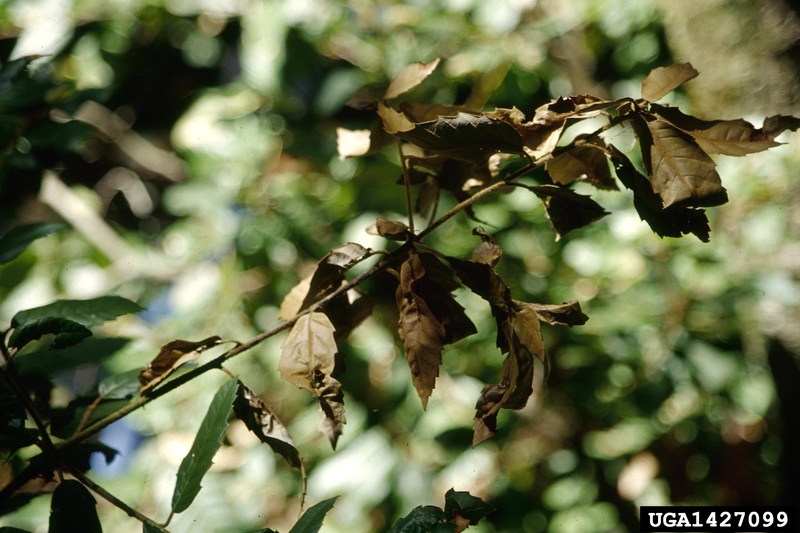 Two types of disease are caused by Phytophthora ramorum, the first being bark cankers and the second being foliar blights. Bark cankers may eventually kill the host while foliar blights serve as a reservoir for the pathogen to remain within and be tranferred from the foliar host. The list of hosts (and foliar hosts) seems to grow with each new report and now includes Coast and Canyon Live Oak, Tanoak, California Black Oak, Coast Redwood, Douglas Fir, Rhododendron, Bay Laurel, California Buckeye, Madrone, Bigleaf Maple, Oregon Myrtle, Toyon, Honeysuckle, Arrowwood, Camellia, Californis Hazelnut, Mountain Laurel, Valley Oak, Poison Oak and Grand Fir. In lab testing it has been found that both Red and Pin Oaks are susceptible this opens up the potential for spread into the Eastern portions of the US as the Red Oak family is found in most of North America. In the field the White Oak family including the Valley, White and Blue Oaks have not been confirmed as hosts or even shown any symptoms- hopefully this means they are immune to Phytophthora ramorum or at least have a higher tolerance level. 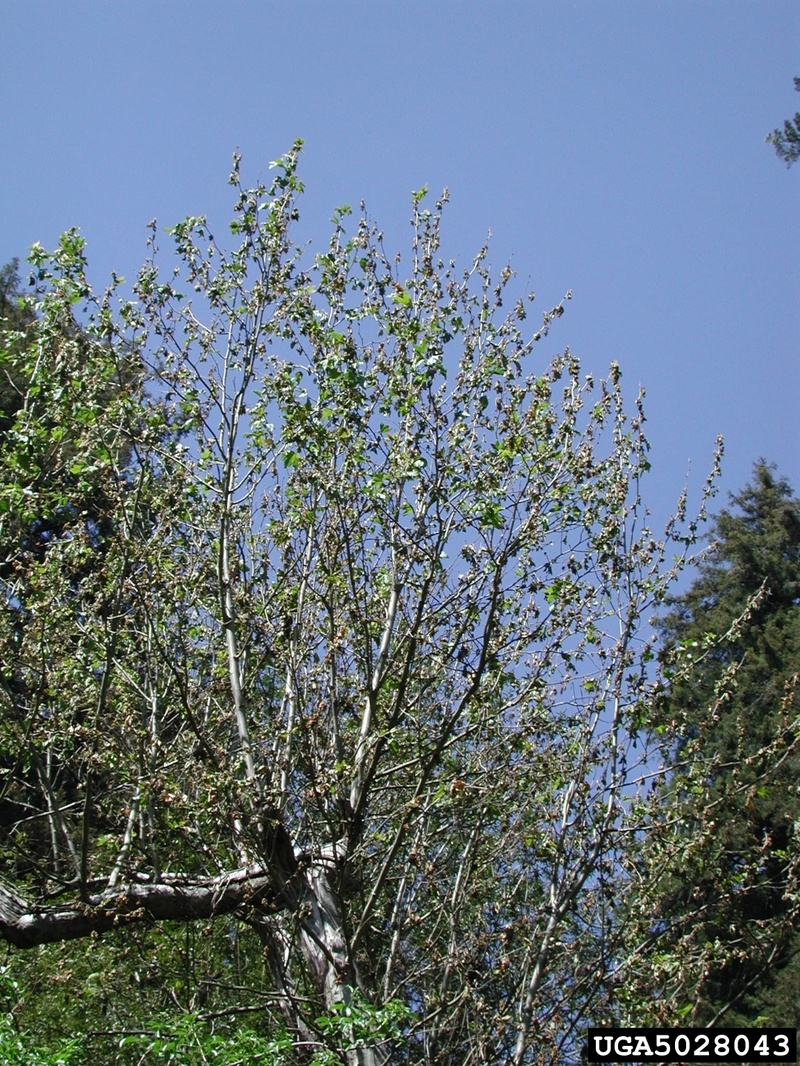 The symptoms of Sudden Oak Death are easily identified by large cankers on the trunk or main stem, browning of the leaves or even death of the entire plant/tree. Some infected trees also become host to Bark or Ambrosia Beetles, or Sapwood rotting fungus-these outside organisms may speed up or even contribute to the death of the host. Foliar host infection os harder to identify and may not be noticed until it is to late. With a foliar host you may notice deep gray or brown lesions on the leaf blades, vascular tissues, petiole, or stems of the host.

Learn more about Oak trees and their diseases/pests on our Website www.ArundelTreeService.com or our blog www.MeetaTree.com

Categories: About an Oak, Save Our Trees - Fundraising & Causes, Diseases & Pests

Oops, you forgot something.

The words you entered did not match the given text. Please try again.

Reply yeezy 500 blush
20:59 on 3 September, 2020
I?d have to check with you here. Which isn't something I usually do! I get pleasure from reading a put up that will make people think. Also, thanks for allowing me to remark!
yeezy 500 blush http://www.yeezy-500.us.com

Reply curry 6
5:54 on 8 September, 2020
Oh my goodness! a tremendous article dude. Thank you However I'm experiencing issue with ur rss . Don?t know why Unable to subscribe to it. Is there anybody getting identical rss problem? Anybody who knows kindly respond. Thnkx
curry 6 http://www.curry-6.us

Reply jordan shoes
5:41 on 10 September, 2020
There may be noticeably a bundle to find out about this. I assume you made sure nice points in options also.
jordan shoes http://www.jordan6.us.com

Reply supreme
2:56 on 17 September, 2020
Hiya! I just wish to give an enormous thumbs up for the great data you have got here on this post. I will be coming again to your blog for extra soon.
supreme http://www.supremeclothings.us.com

Reply jordan shoes
14:44 on 19 September, 2020
Nice post. I study something more difficult on totally different blogs everyday. It is going to all the time be stimulating to learn content from other writers and follow somewhat one thing from their store. I?d choose to make use of some with the content on my blog whether or not you don?t mind. Natually I?ll offer you a link in your web blog. Thanks for sharing.
jordan shoes http://www.shoesjordan.us.com

Reply balenciaga shoes
17:26 on 21 September, 2020
Hiya! I simply want to give an enormous thumbs up for the nice info you have got right here on this post. I will probably be coming back to your blog for more soon.
balenciaga shoes http://www.balenciagaspeeds.com

Reply curry 7 shoes
18:59 on 23 September, 2020
You need to take part in a contest for probably the greatest blogs on the web. I'll advocate this web site!
curry 7 shoes http://www.curry7shoes.us

Reply off white
20:23 on 25 September, 2020
There's noticeably a bundle to learn about this. I assume you made certain good points in options also.
off white http://www.offwhiteclothing.us.com

Reply yeezy
22:12 on 27 September, 2020
I am typically to running a blog and i actually recognize your content. The article has really peaks my interest. I am going to bookmark your website and maintain checking for brand spanking new information.
yeezy http://www.shoesyeezy.us

Reply steph curry shoes
0:27 on 4 October, 2020
you've got a fantastic blog right here! would you like to make some invite posts on my weblog?
steph curry shoes http://www.stephcurry.us

Reply bape clothing
23:20 on 5 October, 2020
This is the best weblog for anyone who needs to find out about this topic. You notice a lot its almost onerous to argue with you (not that I actually would need?HaHa). You undoubtedly put a new spin on a subject thats been written about for years. Nice stuff, just nice!
bape clothing http://www.bape-clothing.us

Reply kevin durant shoes
22:36 on 7 October, 2020
I?d need to verify with you here. Which isn't one thing I normally do! I get pleasure from reading a submit that will make people think. Also, thanks for allowing me to comment!
kevin durant shoes http://www.kd-shoes.us

Reply kd shoes
21:44 on 9 October, 2020
I?m impressed, I must say. Really not often do I encounter a blog that?s each educative and entertaining, and let me tell you, you may have hit the nail on the head. Your concept is excellent; the issue is something that not enough persons are speaking intelligently about. I am very happy that I stumbled throughout this in my search for one thing referring to this.
kd shoes http://www.kd12.us.com

Reply steph curry shoes
23:25 on 11 October, 2020
It?s onerous to search out educated individuals on this subject, but you sound like you know what you?re speaking about! Thanks
steph curry shoes http://www.stephencurry-shoes.us.com